The Architecture of St. Michael’s

A glance at the ground plan of the church will show that the building is cruciform in shape, with the nave and chancel of equal width and both having side aisles. There are two transepts, and a vestry which was added at the restoration of 1894. The design of the west doorway, with its suggested French influence, is most attractive and may be the work of Thomas Frensch and his sons, who are known to have worked on the church. At the east end there is a three-sided apse which has obviously been added on to the chancel. The beautiful south porch, with its little oriel window in the upper storey, its fine arch decorated with a lace-like stone tracery following the arch, its groined and vaulted roof and stone side benches, is one of the most notable features of the exterior. The recessed south door inside the porch, with its rich multi-moulded arch resting on strong side shafts, is much admired. The varied tracery of the windows can best be seen and appreciated by walking round the outside of the building.

It is evident from an external examination that the chancel was joined on to the nave at a later date. This can most clearly be seen by looking along the line of the parapet of the nave and chancel from the south-east corner of the graveyard. The figure of St. Michael, surmounting the buttress to the west of the south porch, and the richly decorated canopie,s of which no two are alike, above the empty niches on several of the buttresses are worthy of note. 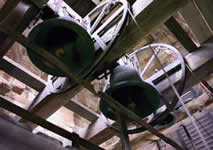 The west door opens on to a high porch formed by the base of the tower. This porch has a stone-vaulted and groined roof with a central boss through which the bell ropes used to pass. On the north and south side of the west porch are two richly canopied recesses or benches. Above the recess on the north side is a facsimile of the National Covenant of 1638 which was signed here.

The bells which hang in the chamber above the high roof of the porch are three in number, the largest 87.91 cm in diameter and about 508 kilograms in weight, bears the inscription in Latin: “The Town of Linlithgow made me — I am called Alma Maria – in the time of the illustrious Lord James the Fourth in the year 1490.” It is one of the oldest bells still in use in Scotland. The second bell is 78.10 cm in diameter and replaced the bell called Santo Michael Archangelo which originally bore the date 1484 but which was fractured in 1773 and recast. The third or smallest bell, 47.62 cm in diameter, cracked and was sent to Holland for recasting. It bears the inscription in Latin: “The Town of Linlithgow made me and then recast me larger in the year of our Lord 1718, the fifth year of the reign of King George. I am called as formerly Meg Duncan.”

The nave opens from the tower porch through a fine arch. From the centre aisle of the nave it will be seen that the church has eight bays, five in the nave, three in the chancel, with the three-sided apse in the east and a porch with tower at the west. There are north and south transepts which were originally side chapels. The dimensions inside the church are, from the apse to the west porch 56 metres, across the transepts 32 metres, and from floor to ceiling 28 metres. 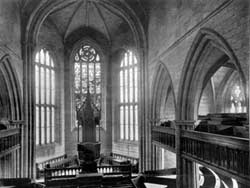 In 1894 the restoration of St Michael’s was undertaken during the ministry of the Rev. Dr. John Ferguson who also wrote the definitive history of the church, ‘Ecclesia Antiqua’. The galleries were removed; the dividing wall was taken down; a chancel arch of loftier dimensions than the original was built; the interior stonework was repaired; the floor of the nave, which over the centuries had been raised a foot above its original level, was lowered, and the

bases of the pillars and the chancel step were revealed; a vestry was built on the foundations of the ancient sacristy; the nave was furnished with pews; a new pulpit, communion table, lectern and font were installed. In 1896 the church was reopened for worship, something of the glory of the original fabric having been restored.

(The last photographs have been taken from Ecclesia Antiqua written by Rev Dr John Ferguson who instigated and oversaw the restoration.)